How many times did you hear the phrase "don't judge a book by its cover" growing up?

While the value of this lesson pertains to things much more important than baseball, its veracity is still applicable to the sport.

deGrom has thrown 29 2/3 innings this season, and among pitchers with at least 29 innings pitched, his 2.12 ERA ranks 15th. Pair this with a 3-1 record in five starts, and on the exterior, there doesn't look like much to complain about. Unfortunately for deGrom, the book doesn't end there.

Unfortunately for the 27-year-old deGrom, there are additional gloomy chapters in his book so far this season.

Perhaps the most glaring change from deGrom's first two seasons in the Majors to what he's done in 2016 is his strikeout percentage (K%). It currently sits at 16.5 percent, which is 25th-worst among pitchers who have thrown at least 29 innings this season.

It's also a decrease by 10.8 percent from 2015 and is the lowest K% he's posted at any professional level in his career.

The decrease in strikeouts could be tied to a decrease in the velocity of his pitches across the board, via Brooks Baseball.

The two pitches deGrom threw most frequently last season were his fastball and sinker, and they are the two pitches with the biggest drop in velocity this season. This, coupled with his changeup seeing the least amount of change in velocity, has helped lead to a 2.6-percent increase in the amount of contact hitters are making and a decrease of 1.0 percent in the amount of swinging strikes deGrom is generating.

The decrease in velocity could also mean that hitters are able to see the ball better against deGrom -- thus making better contact -- and the numbers support this.

deGrom is getting hitters to swing at pitches outside of the strike zone 2 percent less than in 2015, and he's allowing a hard-hit percentage that is 5.0 points higher. The increase in hard-hit balls hasn't led to an inflated batting average on balls in play (BABIP), as deGrom's BABIP is at .316, not significantly higher than the current league average of .297. This means that even if his BABIP normalizes as the season goes on, it shouldn't positively affect his numbers in a substantial way.

The harder hit balls haven't led to much of a change in the percentage of line drives deGrom has allowed, but his ground ball and fly ball percentages have flipped almost eight percent each from 2015.

deGrom is allowing 8.3 percent more ground balls and 7.8 percent fewer fly balls in 2016. While ground balls tend to go for hits more often than fly balls, fly balls have a better chance at becoming extra-base hits than ground balls. So far this season, this has been true for deGrom.

Last season, he allowed 149 hits, or 0.78 per inning, and 16 home runs. The sample size is important to note here, as 29 2/3 innings means there's plenty of time for deGrom's batted ball profile to fall back in line with his numbers from 2015, pending his velocity does the same.

Another noticeable difference from a season ago is the success right-handed hitters have had against deGrom in 2016 compared to lefties.

Righties have a .353 wOBA against deGrom this year while lefties own just a .255 wOBA. His xFIP also suggests he's struggled with righties, as it is 3.95 against right-handers while 2.92 against lefties.

This split did not exist last season. deGrom posted virtually the same xFIP to hitters on either side of the plate (2.90 versus righties and 2.94 against lefties).

The decrease in velocity may again explain for the difference this season. Righties are swinging at almost everything deGrom throws them on the inner-half of the plate, which cannot be said for 2015. Below is an image of right-handed hitters swing percentage against deGrom's pitches in 2015. 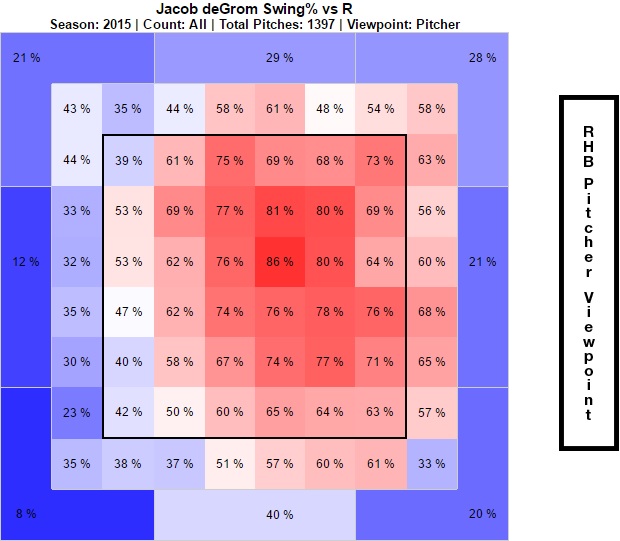 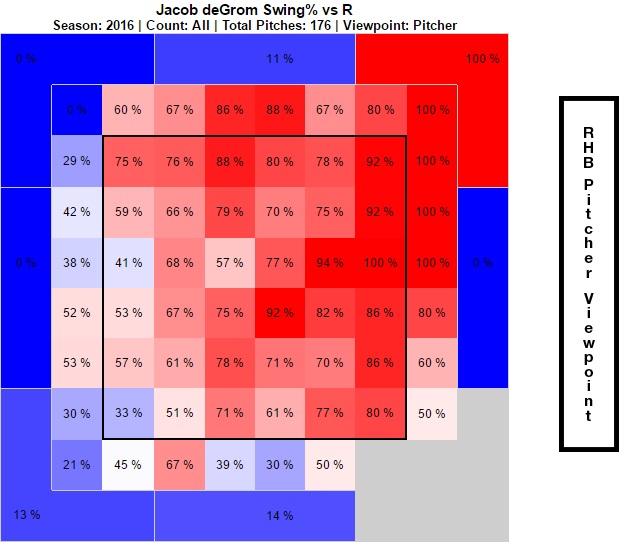 My educated guess for the difference is because deGrom isn't blowing hitters away this season like he was able to in 2015. Hitters are able to catch up to his pitches, and they're letting it rip.

This season, according to Baseball Savant, he hasn't thrown a pitch harder than 95 miles per hour.

His decrease in velocity could be a mechanics issue, and deGrom may soon right the ship. But if he's unable to, this season's book won't have as happy of a conclusion as 2015's did.