There are two clear signs you're watching a baseball game that has gone off the rails.

Sunday's 13-inning game between the Pittsburgh Pirates and Arizona Diamondbacks, won 12-10 by the Buccos, was crazy. Pittsburgh led 8-4 after four innings only to see the Diamondbacks score two in the eighth and two in the ninth to tie it at 8-8, forcing extra innings. The Pirates scored two in the top of the 12th, the D-Backs answered with two of their own in the bottom of the 12th.

Finally, in the 13th, the Pirates put up another two runs and held off Arizona in the bottom half of the inning. In all, the game featured 41 players, 20 for the Pirates and 21 for the D-Backs. The FanGraphs' win probability chart tells the tale. 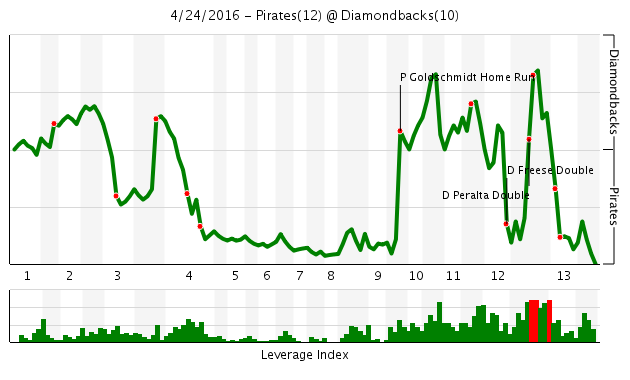 Pittsburgh used seven pitchers in this ballgame, while the Diamondbacks used eight.

Actually, hang on a minute. I need to make a slight correction. The Diamondbacks actually used nine pitchers, but only eight of them threw pitches. The ninth, Shelby Miller, did this.

#DBacks had to put Shelby Miller in left field today. Here's the throw he made to second base (via @CBSSportsMLB): pic.twitter.com/Mgnok5KiA0

Zack Greinke was used as a pinch hitter in the bottom of the 12th when the Diamondbacks tied the game at 10. However, because of an ejection and all of the extra baseball, Arizona was forced to use a pitcher in the outfield. Enter Miller and a series of moves that left everyone's scorecard unrecognizable.

And @ShelbyMiller19 heads out to LF. TomÃ¡s moves from LF to RF. Drury moves from RF to 2B, and Segura moves from 2B to SS. Got all that?

Miller actually had to make two plays during his brief time in the outfield. The first was that nicely played carom off the wall, the second was fielding a routing looping single to left by another pitcher, Jonathon Niese. Miller also had to bat in the bottom of the 13th inning as the tying run. He struck out.

What happened with Miller is a pretty rare occurrence. According to Baseball Reference, a pitcher has played the outfield in a Major League game just 300 times since 1950. The last time it happened was in September of last year when Jason Gurka manned the outfield against the Los Angeles Dodgers.

Houston's Tony Sipp actually did it twice in 2014, against the Rays and the Diamondbacks.

Sipp's usage was more strategic by then-manager Bo Porter. Sipp came in and pitched to a left-handed batter, but went to the outfield so Porter could bring in a righty to face a right-handed batter. Because Sipp never officially left the game, he was put back on the mound against a left-handed hitter later in the inning.

San Diego's Andrew Cashner had to play some outfield in April of 2014...

Wesley Wright did it twice, in 2011 and 2012. And hey, is that Roy Oswalt in left field in 2010 after the Phillies ran out of players against the Houston Astros?

Why, yes it is. And hey, he even recorded an out!

The list also includes players who tried careers as both pitchers and outfielders. Adam Loewen played eight games in the outfield for the Blue Jays in September of 2011. Ron Mahay was a replacement player during the 1994-95 strike that actually managed to stick with the Red Sox after the players came back. He started as an outfielder then transitioned to pitcher.

In fact, most of the 300 instances in which this has occurred are the work of four players: Mel Queen, Danny Murphy, Dick Hall and Clint Hartung.

However, those four players were all known for playing both positions on a regular basis. What happened with Miller, Gurka, Sipp, Cashner, and other well-known names like Randy Johnson, Kyle Lohse, Ron Guidry, Fernando Valenzuela, Dave Stieb and Don Larsen was much different; a pitcher pressed into emergency service because a game got a little out of control.