Itâ€™s hard to imagine Kenta Maedaâ€™s MLB career getting off to a better start.

After eight dominant professional seasons in Japan, the 28-year-old pitcher took his talents across the Pacific to Los Angeles, and heâ€™s impressed in his first two big league outings.

Just how good have things gone? Consider the fact that heâ€™s driven in more runs in this one swing than opponents have in 12 innings facing him.


In his 12 scoreless innings, Maeda has allowed 10 hits and just a single walk, while striking out 8. Itâ€™s early, but his performance fits the profile he received prior to coming to the states: a pitcher with impeccable control who may not strike out many batters.

His strong performances have also put Dodgers history in his grasp.


(Letâ€™s just hope if Maeda follows in Stewartâ€™s footsteps after his playing career, he has a little better grasp of the trade market.)

His strikeout rate was above average but does not really stand out, given the average strikeouts per nine innings in the Japanese Central League (one of the two leagues in Nippon Professional Baseball) was 6.7 in his rookie season and 7.1 last year.

Despite ranking 20th in strikeouts per nine with 7.6 last year, Maeda was third in the league in walks per strikeout last year (4.3), thanks to his 1.8 walks per nine rate.

These numbers donâ€™t tell the full story, though. If you were expecting a pitcher who just pounds the zone, you would be way off.

Maeda is 53rd out of 85 qualified pitchers in terms of percentage of total pitches in the strike zone, per  FanGraphs, and generally works down in the zone or lower. This is evident in his zone profile over at Brooks Baseball. 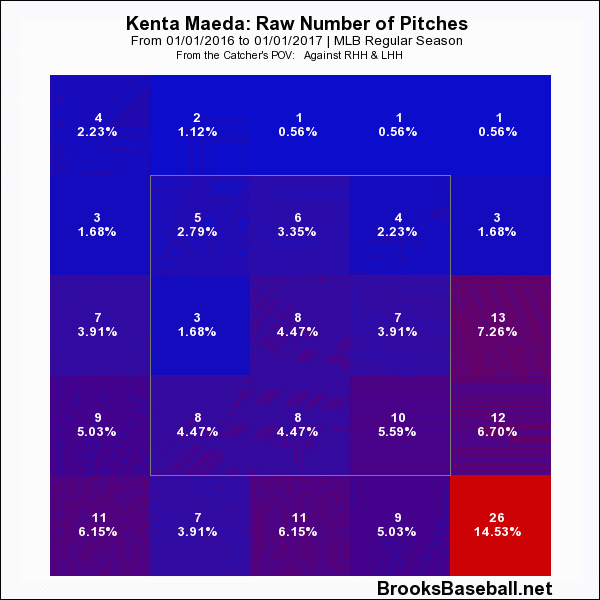 Maeda has gotten opponents to swing at a third of pitches out of the zone (ranking 15th), according to FanGraphs, explaining the low walk rate despite the comparatively low frequency of strikes (he also ranks 30th in terms of in-zone swing rate, as he is tied for the 13th-highest overall swing rate in the Majors).

On the swings out of the zone, opponents are making contact at a below-average rate (56.7%, relative to the big-league average of 58.6%), and this has helped Maeda post one of the leagueâ€™s better whiff rates.

When opponents have made contact on his pitches thrown out of the zone, they generally have not been hit very hard. Opponents are only 3-for-18 when making contact out of the zone against Maeda, with an average exit velocity of 83.4 miles per hour, according to Baseball Savant.

He is also running a very healthy 57.1% groundball rate, which should help him keep the ball in the park going forward.

If Maeda can continue to get opponents to chase balls out of the zone, he could easily be the latest successful Japanese import to the big leagues.

The Dodgers Are Suddenly Thin at Starting Pitcher

2016 National League West Preview: Beware of the Even Year