Why Charlie Mortonâ€™s Success Could Actually Be Sustainable

Sal Cacciatore  —  @SCacc8 Jun 19th, 2015
Share on Facebook Share on Twitter
Charlie Morton has always been a pitcher with a low strikeout rate and high groundball rate; this year, he has taken his K% to new lows and grounder rate to new highs.

After starting the season on the disabled list, Charlie Morton has returned to the Pittsburgh rotation as a more extreme version of himself.

Since weâ€™re talking about a pitcher with a lifetime 114 ERA- and 15.5% strikeout rate, maybe youâ€™re not jumping out of your chair, but the results have been very good in his 33.1 innings this year.

While this has certainly been a good thing (and hopefully youâ€™ve taken the advice of our Jeff Hicks and streamed Morton in fantasy), these figures are not exactly predictive going forward.

It is early, but we can put a bit more stock in Mortonâ€™s strikeout and walk rates. Unfortunately, despite the career-best run prevention, his K-BB% rate is poor, even by his standards.

Morton has struck out just 11.6% of the batters he has faced this season, while walking 6.2%, good for a 5.4% K-BB percentage. This somehow worse than his 6.8% career mark, which translates to a 4.58 kwERA (kwERA is an ERA estimator developed by Tom Tango in which the only inputs are walk and strikeout rates; despite its simplicity, it is very predictive).

Based on this, it would be fair to question how Morton has stayed in the big leagues. His savior has been his ability to keep the ball in the park, doing so by keeping the ball on the ground.

Still, his career FIP- is 106, and before this season, he had not had a year with a FIP- or xFIP- lower than 98, as the strong home run rate was offset by the poor walk and strikeout numbers.

This year, Morton finally has defense-independent numbers worth writing home about, with a FIP- of 89, xFIP- of 91, and a 3.32 SIERA that is 28th among the 157 starting pitchers in baseball who have tossed at least 30 innings.

Weâ€™ve already established that his strikeout-minus-walk rate has not improved but declined further, meaning the difference maker in 2015 must be an even better home run rate.

Sure enough, Morton has allowed only one home run this season, good for a home run rate of 0.8%. A 7.7% home run-to-fly ball rate (which should regress a bit) has helped, but the main factor has been a 67.0% groundball rate.

The low groundball rate, in turn, has been driven in part by a drastic increase in sinker usage (a pitch that is classified in some places as a two-seam fastball). After throwing the pitch 57.6% of the time in 2014, Morton has thrown it 70.7% of the time this season, according to Brooks Baseball. Over the last three seasons, the pitch has generated between a 57.8% and 70.9% groundball rate, which has risen to 73.3% this season.

The increased sinker usage has come at the expense of Mortonâ€™s 93 miles per hour four-seam fastball, which he is now throwing just 4.7% of the time (marking a continuation of its decline in usage, as Morton threw the pitch 14.0% of the time in 2013 and 10.4% of the time last season).

While the worm-killing sinker has been a prime factor in the increased grounder rate, Morton is generating more grounders with his fastball and curveball as well, mostly because he is throwing almost exclusively below the strike zone.

Morton always worked predominantly low in the zone, but never to such extreme levels. 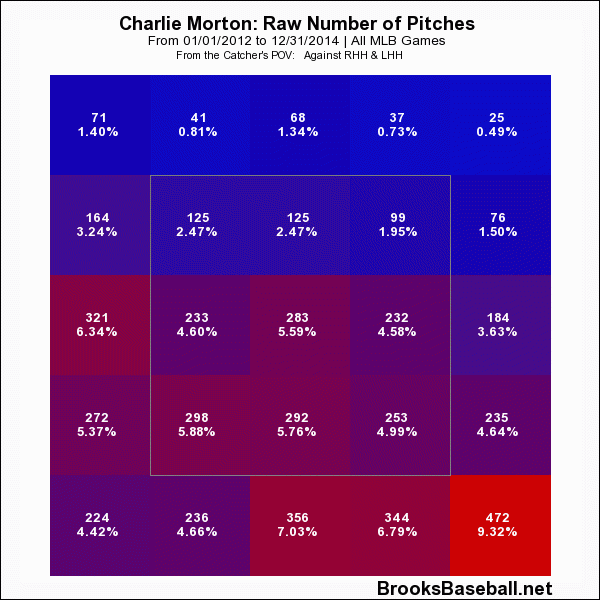 Contrast that to his 2015 zone profile. 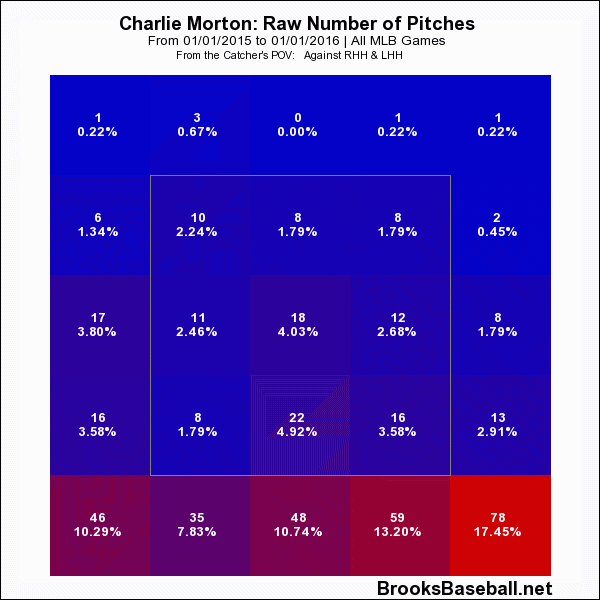 And this is not just a product of increased sinker usage, as he has thrown 47.3% of non-sinkers low and away to righties this year.

Again, we are talking about a small sample, but ground ball and fly ball rates tend to be among the first pitching stats to stabilize, so the â€œnew and improvedâ€ Charlie Morton may be here to stay.

How Gerrit Cole Became One of Baseballâ€™s Best Pitchers

Why the Pittsburgh Pirates Are Legitimate World Series Contenders