Is There Something Wrong With Clayton Kershaw?

So, let's talk about Clayton Kershaw.

The reigning National League MVP and Cy Young Award winner, the man who put together one of the most dominant regular seasons in NL history, can't get his stuff right. After a 4-0 loss to his arch nemesis Madison Bumgarner and the San Francisco Giants, Kershaw is now just 2-3 on the season with a pedestrian 4.32 ERA.

He didn't pitch badly against San Francisco, lasting 7 1/3 innings and giving up four runs on seven hits with two walks and seven strikeouts. But he didn't pitch great, and his team scored no runs off Bumgarner, who added a little insult to injury at the plate as well.

MadBum fired the first shot in a pitcher's duel with Clayton Kershaw and it was a home run: http://t.co/6uhdc2Qz00 pic.twitter.com/ZFaAJE9ilJ

Yo, that thing went a long way.

Per MLB's gameday data, Bumgarner got a 91 mph fastball from Kershaw and hit it 105 mph. Ball traveled 415 feet.

And according to ESPN Stats & Info, until that tater by MadBum, Kershaw had faced an opposing pitcher 410 times without giving up a longball, third-most among active pitchers (trailing Tim Hudson (523) and A.J. Burnett (475)).

It's just been that kind of season for Kershaw. But why? What's going on here? Is there a reason to panic or is Kershaw close to putting it all back together? A deeper dig inside the numbers shows that it's a little of both.

As far as his peripheral statistics, they're mostly pretty good.

In other words, those look-ahead stats all see a pitcher that is experiencing results that aren't in line with what he's actually doing. That's reflected in his 11.26 strikeouts per nine innings (K/9), which is higher than last year. And he's actually throwing harder than he did in 2014, averaging 93.6 miles per hour on his fastball, compared to 92.9 last season.

Kershaw has also been unlucky, giving up a .349 batting average on balls in play (BABIP). The league average is .293, and his career average BABIP is .274. So, some of the damage has been out of his control, and on average, Kershaw's batted ball velocity of 85.36 miles per hour is seventh-best in baseball, according to Baseball Savant.

But there are some issues Kershaw has had this year which, when taken together, sheds light on why the results haven't been there for him yet.

First, he's allowing more line drives this year, 25.2% of all balls put in play, than at any time during his career. Last year only 19.0% of batted balls against him were line drives. This discrepancy has helped account for his unusually high BABIP. And while he's giving up fewer fly balls than at any point in his career, just 21.3%, way more of those fly balls have been leaving the yard, 18.5% coming into Thursday.

Also, 32.8% of all balls hit off him have been categorized by Fangraphs as "hard hit," way above his career average of 24.7% and last year's 24.3%. Simply put, more batters are getting the barrel of the bat on Kershaw's pitches. But why?

Location. As you can see by this graphic from Brooks Baseball, more of Kershaw's pitches, particularly his fastball, have been up and out over the plate than they were in 2014.

That has resulted in this disparity in his fastball and slider, with stats again courtesy of Brooks Baseball. 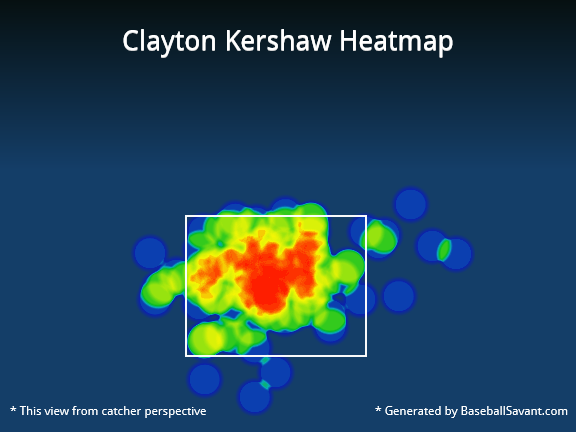 That's a lot of red in the middle of the plate.

It appears as though much of Kershaw's problems stem from poor location, something that a pitcher as talented as he is, with stuff as good as his, should be able to overcome. It's more likely than not that, at some point this season and probably very soon, Kershaw will get his location issues figured out and go on some crazy run that will get that ERA down to around where his xFIP says it should be.

But until he does, he's going to get hit. Even the best pitchers with the best stuff will get knocked around if they leave that stuff over the middle of the plate.

Count on the rebound. I mean, it's Clayton Kershaw after all.

MLB Power Rankings Update: According to Math, the Dodgers Are Easily the Best Team in Baseball

What's Gotten Into The Minnesota Twins?