As draft season continues and we eagerly await news on the start of some kind of MLB season, which players remain over-drafted relative to their expected output in 2020? Let's look at three expensive options who may be worth fading at their current price.

Putting aside any trash can or sign stealing ramifications (remember when that was a thing we cared about?), Alex Bregman's stellar 2019 season fits the very definition of a superstar, but it also is likely an outlier campaign in terms of power output.

In just his fourth season in the majors, Bregman demolished his career highs in home runs, runs, RBI, walks, and batting average. We know that the baseline for offensive statistics rose for all players last year with a juiced ball and a more pronounced focus by pitchers on the three true outcomes, but do the underlying numbers support Bregman continuing his monster output? Diving deeper into his metrics, the answer is likely no. 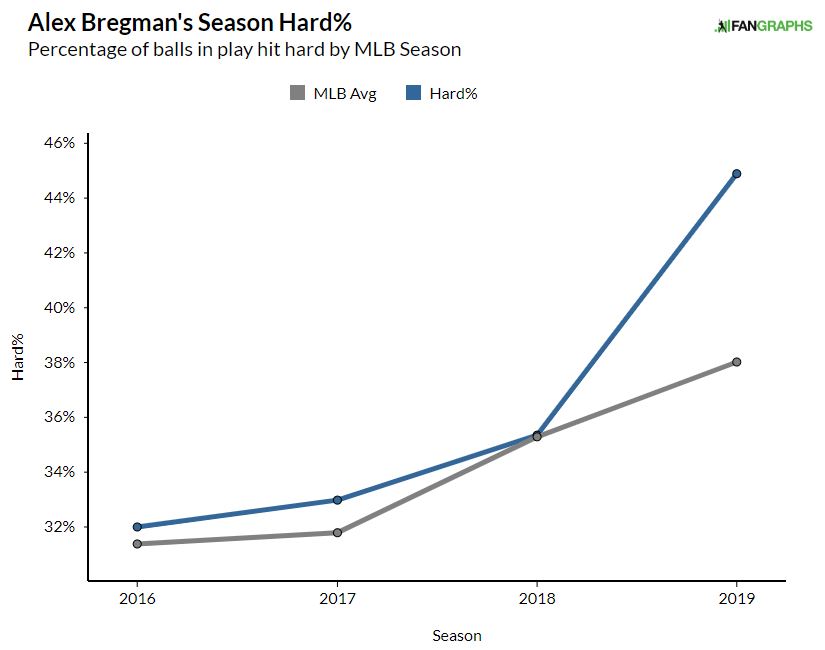 To see a player tracking for three years with the major league average and then see him jump 10 or so percentage points above that figure should give us pause. It's safe to state that Bregman is better than the average major leaguer, but can we assume this level of power production going forward?

Bregman's pedigree has always been a low-strikeout, high-walk batter. He led MLB in 2019 in percentage of swings outside of the zone (O-Swing%) at only 18.8%, was fifth in contact rate (Contact%) at 87%, and was third in walk percentage (BB%) at 17.2%. But these are all stats in which he was already inside the top 15 in 2018. Bregman's strikeout rate and batting average on balls in play (BABIP) remained largely unchanged from 2018 to 2019, and he only gained just over two percentage points in fly-ball rate from 2018 to 2019.

What we see with those fly balls, however, is that his homer-per-fly-ball percentage (HR/FB%) in 2019 skyrocketed to 50% higher than his career average (18.6% compared to 12.5%), a number that ranked top 50 in the league and put him alongside players like Nolan Arenado and Khris Davis. This statistic is highly susceptible to regression, so that, combined with a different ball in whatever type of 2020 season we have, leads me to believe that the power numbers for Bregman are likely to resort back to his career norms (projection systems have him between 32 and 35 homers in a full season).

He still remains a strong candidate to be one of a very few 30 homer-100 RBI-100 run-100 walk players, but he's one who has too many questions on his power for me to spend a first-round pick on him.

I am on the bandwagon that is rolling down the path that Fernando Tatis Jr. is bound for future stardom. But I am also one who believes we need more than a half season's worth of data to determine if what we saw last year was a projectable baseline for Tatis moving forward or just a half season spike that is likely to regress.

If I think that a player like Bregman's power numbers in 2019 were an outlier, the only conclusion I can see for Tatis from 2019 is that his pop was a complete mirage. In just 84 games, Tatis logged numbers in home runs, slugging percentage, isolated power, and HR/FB% that he had never approached at any level in the minors. In addition, his strikeout percentage (29.6%) was his highest at any level, which one would expect from a player entering the majors for the first time. That strikeout rate plus a contact rate (67.1%) that ranked 259th among all players with at least 300 plate appearances paint a pretty clear picture that we should temper expectations for Tatis in Year 2.

Don't get me wrong -- Tatis is a dynamic young player. He will be a star someday. But as with all young players, we must be cognizant of growing pains.

Even last season, after he was absolutely scorching hot in the first half, both his on-base percentage and slugging percentage dropped 60 points in the second half. Teams and pitchers will begin to discover his weaknesses -- such as the low contact rate -- and will exploit them. Add in a back injury last August as well as Tatis' run-through-a-wall aggressive style of play, and there are too many warning signs to drop a second-round pick on Tatis. Wait until next year, when he should be more of a bargain.

It's quite an impressive feat that Adalberto Mondesi has stolen a combined 75 bases over the past two years despite missing 94 games with various shoulder and groin injuries, but it's the combination of injuries and poor plate skills that have me staying away from Mondesi in the fifth round this draft season.

If we removed Mondesi's name from the conversation and told you to give an ADP to a player that averaged 37 steals, 11 homers, 52 runs, 49 RBI, and a .298 on base percentage over the last two seasons, I doubt any of us would blindly project this player for the fifth round. But that is where we find Mondesi in 2020, and it is largely driven by the tempting What Could Be.

At no point in his major league career, however, has Mondesi been at least an average hitter. Over the last two seasons combined, Mondesi has the third-worst contact rate among all batters with at least 700 plate appearances (64.8%), and he owns the 12th-highest rate of swings on pitches outside the zone. He has poor plate discipline, proven by the fact that his walk rate (4.1%) is seventh-worst in the league since the beginning of 2018. 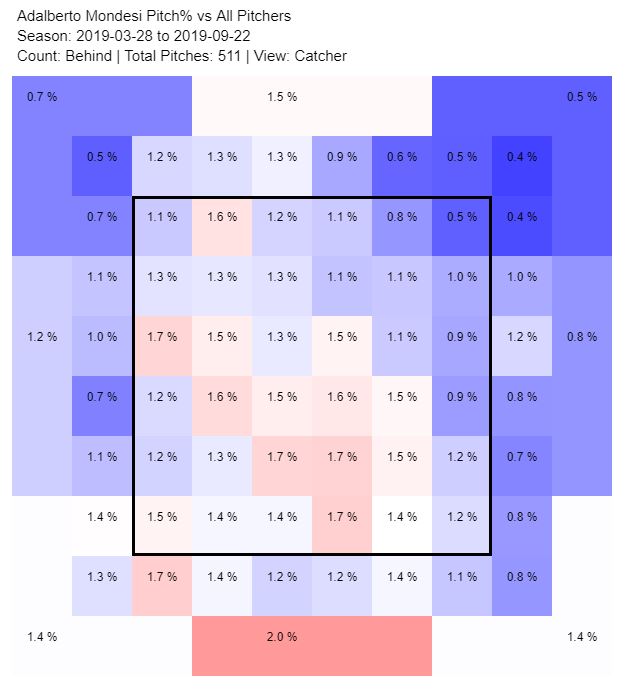 Mondesi's strike zone essentially becomes one massive cold zone when he is behind in the count. Pitchers know he is not interested in taking pitches, so they can throw as much trash as they want with mostly successful results. This is the unavoidable downside to a player who refuses to take a pitch, and this is what directly leads to Mondesi's walk-to-strikeout ratio of 0.14 the past two years, the worst clip in the league. Once again, the anti-Bregman, who ranks first in that time (1.28).

Yes, Mondesi's steals will provide your fantasy team with a tremendous advantage in that category, but give me Jonathan Villar a round later or Lorenzo Cain in Round 19 as players who can get steals but also can contribute in other categories and don't carry the injury risk that Mondesi does.

With 12 shortstop-eligible players being taken in the top six rounds this year, there is simply too much opportunity cost in missing out on one of those strong options for what is essentially a one category contributor who can't stay healthy.