As we eagerly wait for news about when we will have a season and how long the season will be, mock drafts and season-long drafts march on, giving us a chance to dive deeper into pitcher projections.

With a delayed start date and perhaps a shortened season, it becomes that much more critical to nail the pitching side of our fantasy rosters. Most major projection systems have now updated their pitchers to reflect only 22 to 25 starts in 2020, so as we await the unknown about the schedule, one thing will always be clear: there will be plenty of pitching value throughout our drafts.

This piece will look at some mid-round pitchers with strong underlying numbers who could take a step forward this year.

All ADP info comes from FantasyPros.

Entering only his third season in the major leagues, Woodruff is already being drafted as a top-25 pitcher in 2020, right after Trevor Bauer and before Corey Kluber, two established arms. Is the ninth-round investment worth it for a pitcher with barely 200 major league innings? The underlying data tells us this is a situation when we should be heavy investors in Brandon Woodruff.

Woodruff has improved his strikeout rate, FIP, and K/BB each season he has been in the majors, so what accounts for the sustainable improvement over these three campaigns, particularly as he moved close to elite status in 2019? The answer starts and ends with his pitch selection.

Beginning in 2019, Woodruff added a pitch to his arsenal -- a sinker -- that he essentially had never thrown before at the major league level. His new sinker was added to his pitch mix in a significant way -- in 2019 he had the 28th-highest percentage of sinkers thrown among all pitchers, basically replacing a third of his fastball usage with that pitch.

Woodruff's fastball was already the sixth-fastest on average last season (96.7 MPH), and he added a sinker that essentially looks like his fastball. He threw his new pitch an average of 96.3 MPH last year, good for fifth-fastest in the league. Batters now have to contend with a pitcher who can throw two pitches that look identical out of his hand and travel roughly the same speed.

Why is this important? Woodruff is enticing batters to swing at his pitches in the zone, but his best stuff -- primarily the fastball and sinker -- is so good, batters are having a hard time making contact with it. When they do make contact, it's generally weak. His soft contact percentage of 19.7% was 13th-best in the majors.

This new pitch mix is turning Woodruff into an emerging ace and fantasy owners should buy while the price is reasonable.

In 2019, there were a total of nine starters (minimum 90 innings) who accumulated a K/9 rate of at least 9.5 and a BB/9 of 2.20 or lower. Many of them you could guess: Gerrit Cole, Max Scherzer, Justin Verlander, Jacob deGrom, Shane Bieber, Walker Buehler, and Clayton Kershaw. But there are two who stand out as not quite so obvious: Chris Paddack and Frankie Montas.

Paddack is getting quite a bit of hype this spring-maybe-summer training. He is being drafted as a top-20 pitcher. Montas, on the other hand, is still falling all the way to pick number 109 despite having ratios just as strong as pitchers taken four to six rounds earlier. Why is Montas not getting the same love as Paddack and other early round pitchers?

On the surface, the answer can be found in three little letters: PED. Montas was suspended after just 16 starts last year, which was incredibly unfortunate as he was in the midst of a breakout year with nine wins and an ERA of only 2.63 in those 16 starts. So while we can't definitively know how much of Montas' success is due (or not due) to PEDs, there are some indicators that point to sustained success if Montas can keep up his gains from last season.

There are several statistics and ratios that Montas has improved each of the three years he has been with the Oakland Athletics. Namely, WHIP, BB/9, FIP, and K/BB have all seen strong improvement in his time in Oakland. But what has seen overwhelming improvement over that time is his batted-ball profile. Specifically, Montas has improved his ground-ball rate to an elite level compared to the MLB average. 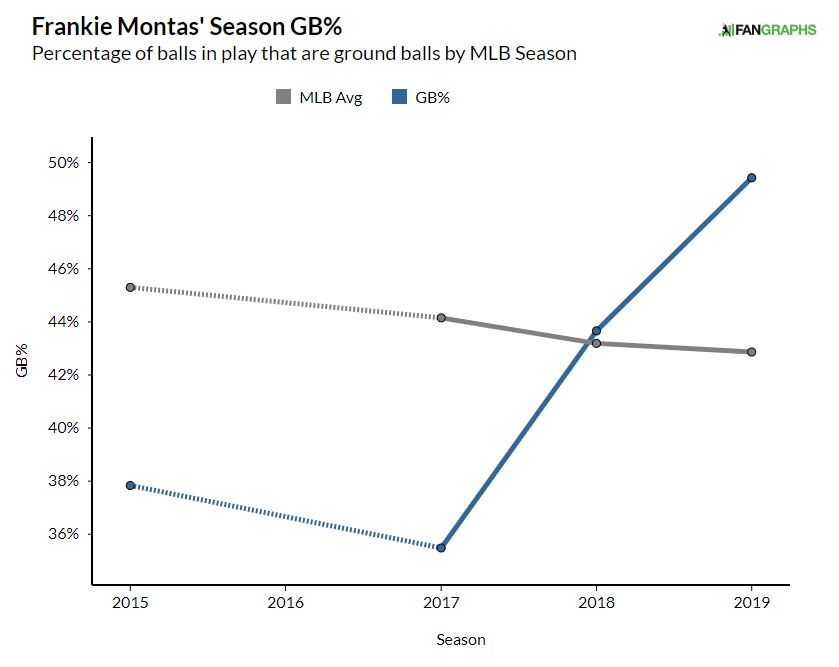 All of these stats point to Montas being an emerging ace, but drafters are understandably nervous about the unknown after coming off half a season missed to PEDs and not much of an ace-level track record. The 11th-round price tag, however, is certainly worth the risk, and if we can get full season's worth of starts with anything near the type of performance he exhibited last year, he has a clear path to paying off that price tag.

It's a tale of two pitchers no matter how you dissect Dinelson Lamet's performance. So the question for 2020 is how lucky do you feel?

There are a myriad stats that pull fantasy drafters in different directions and demand an answer to what kind of pitcher will we see in 2020. For me, it's the strikeouts that tip the scale.

Only Gerrit Cole and Chris Sale had a higher K/9 than Lamet did last year, as he relied on his elite fastball (96.1 MPH, 10th-best among starters) and a healthy dose of sliders (43.9% of his pitches, second-most among starters) to keep hitters off balance and induce a 14% swinging-strike rate, 15th-best among all starters. It's well documented that Lamet possesses a strong fastball that he can regularly blow by hitters. But what is less known is how valuable his slider is. According to Fangraphs' Linear Weighted Pitch Rankings, Lamet had the sixth-most valuable slider in all of baseball last year, saving 2.27 runs above average for every 100 times he threw the pitch. With two dominant out pitches at his disposal, the strikeouts should continue to pile up.

Lamet's downfall -- and what ultimately led to the high walks -- was his poor first-strike percentage. He threw only 60.1% of his initial offerings for strikes, which ranked 95th among all starters. If Lamet can show some improvement in that area in 2020, he should make substantial strides and retain the strikeout rate that mowed down batter after batter last year.