Whether you are preparing for a delayed fantasy league draft or mock drafting at home to kill time while you deal with the new normal these days, finding those late-round gems is one of the keys to roster construction, and it can help you build a winning lineup for the upcoming season -- whenever that may be.

Especially in a high-variance sport like baseball, it is paramount to not look just at immediate past performances as indicators of success, but to also look at the underlying metrics that can be more predictive than browsing box scores or looking at past bottom-line results. This article will aim to look at four names who have the potential to provide massive power numbers in 2020 but are going mostly overlooked this draft season for various reasons.

In 2019, we quickly learned that a juiced ball and more hitter focus on launch angle and exit velocity led to a massive spike in home runs. Last season there were 58 players who hit at least 30 home runs (compared to just 27 in 2018), assuring that power could be found at any point in the draft while also being plentiful on the waiver wire throughout the season. Players like Pete Alonso (53 home runs), Jorge Soler (48), Franmil Reyes (37), and Max Kepler (36) were late-round picks or even undrafted last season. A key to drafting in 2020 will be to identify similar late-round sluggers who can provide elite power at a low price.

We don't know what the season is going to look like at this point or if we will even get the same ball from MLB, but these players ranked outside the top 100 hitters in Fantasy Pros current ADP tracker and can serve as cheap sources of power in 2020.

Despite playing in only 82 games and accumulating just 327 plate appearances in his rookie season with the Tampa Bay Rays, Brandon Lowe crushed 17 homers and drove in 51 runs in what amounted to essentially half a season. Coming into this year, most projection systems (Steamer, THE BAT, etc.) are high on Lowe's power continuing, with most predicting the second baseman will hit 23 to 25 home runs.

Lowe was a Statcast darling in 2019, ranking 10th among all players with at least 100 balls in play in barrels per batted ball event (Brls/BBE). His 16.3% Brls/BBE rate ranked higher than Pete Alonso's, Christian Yelich's, and Bryce Harper's among many others. Not surprisingly, he was also top 20 in barrels per plate appearance (9.2%). Lowe's batted-ball profile shows some uptick in the most important balls in play. His line-drive percentage (26.9%) and fly-ball percentage (42.9%) were both slightly higher than they were in his minor league career (25.2% and 40.1%), so some slight power regression is likely.

Lowe's hard-hit percentage, however, was top 10 among all second basemen in 2019, so based on the underlying numbers, I would much rather take a gamble on Lowe in drafts than players like Gavin Lux and Scott Kingery, both of whom are being drafted several rounds before Lowe.

Most people missed on predicting the Christian Walker power breakout last year. Once Paul Goldschmidt was shipped out of town, it was assumed Walker would get a decent share of the playing time at first base, but I'm not sure anyone knew he would play 145 games and accumulate 600-plus plate appearances. He certainly served as a serviceable replacement for Goldschmidt, finishing the season with 29 homers, 72 RBI, a .348 OBP, and .346 weighted on base average (wOBA).

While many may see these numbers and scream "Regression is coming!" the underlying numbers show there may be some room for improvement for the slugging first baseman. Between 2018 and 2019, Walker almost doubled his walk rate from 5.7% to 11.1%, proving to be more selective in the pitches he chooses to hit. His strikeout rate reflects that, as well, as he knocked more than 15 percentage points off of that number, settling in at 25.7%.

But where we have most cause for optimism is in Walker's unsustainably low fly-ball rate last season. In his previous two major league seasons, Walker recorded fly-ball rates of 51.9% and 57.1%, but last year it dipped to only 38.4%.

If the playing time remains and he can lift more fly balls, his strong homer-per-fly-ball rate (20.1%, double the league average) and his 46% hard hit rate (36th among all batters last year) should propel him north of 30 home runs in the desert this season, assuming he see somewhere close to the 600 plate appearances he got a campaign ago.

Here is the list of players who had a better Brls/PA percentage than C.J. Cron in 2019: Nelson Cruz, Gary Sanchez, Joey Gallo, Mike Trout, Aaron Judge and Miguel Sano. That's the entire list.

Cron was mashing the ball last year, and if he had not lost almost a month due to right thumb inflammation, he likely would have cruised past 30 home runs -- instead of the 25 he hit in only 125 games.

Cron's bread and butter is taking on left-handed pitching. Last year against southpaws, he slugged .636 with a 1.020 slugging percentage -- both numbers better than Alex Bregman's full season, for example. As you can see in the chart below, Cron is elite against left-handers, while he gave up some of his recent gains against right-handers from 2018. 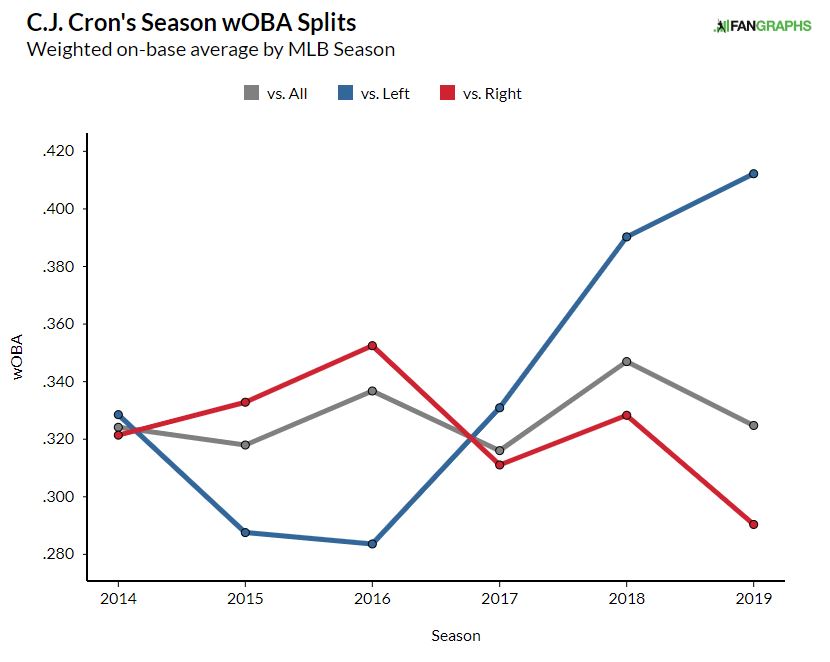 If Cron can improve even marginally on his performance versus right-handers this year (in 2019 he had a career-low .404 slugging and .685 OPS thanks to an unlucky .254 BABIP against righties), he has the opportunity and pedigree to be a severely underpriced source of power around pick 240 of your draft.

Ian Happ burst onto the scene in the first game of 2018, hitting a home run on the first pitch of the season and leading the Chicago Cubs to an Opening Day win.

But his season went south from there as he ended up slugging only .408 on the year while also striking out 167 times in 462 plate appearances (36%). That strikeout rate coupled with a bad spring training led to Happ spending most of 2019 in the minors, gaining only 156 plate appearances with the big club last year. But in that short time, he began to show the promise that Cubs management and fans have seen in him since he was drafted.

Whatever adjustments he made in Triple-A to improve his contact percentage, they worked, as he dropped his strikeout rate from 36% to 25% across seasons, which was the best adjustment among any player last year. His contact rate also jumped back up to near league average after an abysmal clip in 2018. 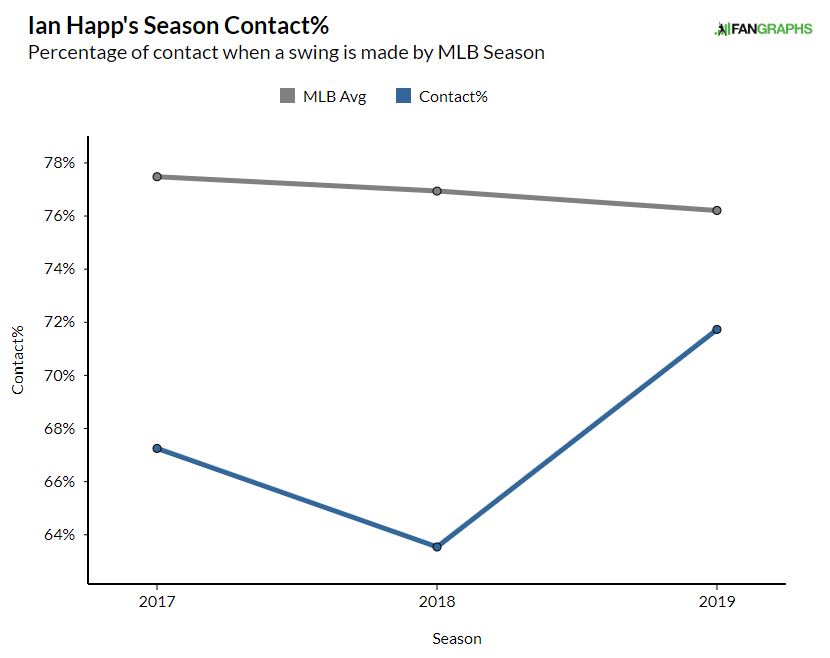 In terms of power, Happ as always had that in spades. In 2019, his 13.7 Brls/BBE was 27th in MLB among batters with 100 balls in play, and he ranked 25th among all hitters with a homer-per-fly-ball rate of 26.2%. Eligible at multiple positions this season (2B, 3B, OF), Happ is the perfect end-of-draft dart throw who can provide some pop at several lineup spots.