NBA Betting Guide for Friday 1/28/22: The Spurs Are Better at Home Than Their Record Suggests

It's the fever of fantasy baseball draft season, and drafts are going off at an alarmingly fast rate.

If you are part of some of the larger, nationwide leagues -- like the National Fantasy Baseball Championship (NFBC) -- drafts are in full swing. In fact, since January 1st, 238 drafts have taken place, and from that, we can use their average draft position (ADP) data to our advantage.

What we can also do is showcase picks that have gone in this first round and determine how safe they really are. If you haven't heard the phrase, you can often lose leagues in the first round more often than you can win them.

Utilizing a stoplight approach in terms of safety (green being the safest, red being the riskiest), let's examine the first round and where some challenges may lie.

It may be foreign not to see a certain name leading off this list (more on him shortly), but there's a new sheriff at the top of drafts, and the precocious young outfielder for the Atlanta Braves, Ronald Acuna, now sits atop the pile as the pick to own. And it's kind of easy to see why:


After slamming 26 home runs as a rookie, all Acuna did last season was smash opposing pitching for 41 home runs (tied for seventh-best) and swipe 37 bases (third-best). Almost a 40-40 season? Yes, sir. The last player to reach that feat was Alfonso Soriano in 2006.

Want possibly the least risky stud in all of fantasy baseball? Then Mike Trout is your dude.


Dating back to 2012, Trout's home run and stolen base combo reads like it could be a cheat code. He's mashed 29 or more home runs every year over that span, and he's stolen double-digit bags in each to boot. Eight years in a row? That's pretty decent.

He also insulates your hitting statistics in nearly any format. He's hit .287 or better in all those seasons, and if an OBP league is your fancy, he's posted a double-digit walk rate, too.

If it weren't for a late season hiccup, we would likely be discussing Christian Yelich as easily the consensus number one pick in 2019. Then this happened:


Despite that injury, Yelich had another massive season with 44 home runs and 30 steals. He clearly enjoys Milwaukee, posting batting averages of .326 and .329 in back-to-back years, as well.

But it's hard to ignore that the guy broke his kneecap, and while all reports are that he should be healthy for Spring Training, it's worth monitoring. Could it affect his ability to run on the bases? It would seem likely. Monitor this situation, but it feels like Yelich may not be as valuable as in past seasons.

The outspoken Cody Bellinger of the Los Angeles Dodgers has been making waves recently with his public comments about the Houston Astros scandal, but it's possibly overshadowing his monster bat and what he's accomplished the past few seasons.

While he went far later a year ago in drafts, there's no ignoring the slugger now. He's popped 25-plus home runs in three consecutive years, and perhaps the most underrated aspect of his game is that he's hit double-digit steals in each of those seasons.

Last year's 47 home runs and 127 runs scored may not be in the cards, but it's clear that Bellinger has emerged, and in his age-25 season, the sky is the limit.

It may have been a bit protracted, but Mookie Betts is a member of the Dodgers, and he's pretty pumped:

Boston, thank you for an amazing 9 years.

Another very safe player with a very high floor, Betts was arguably fantasy's best player in 2018 after a .346 season while hitting the 30-30 mark. He had flirted with those categories before and finally reached it -- and he threw in 129 runs scored, too.

While the average dipped a bit in 2019, what makes me even more excited about a player like Betts is that the home run total could rise. Check out this graph from the guys over at Baseball Savant overlaying Betts spray chart in Los Angeles: 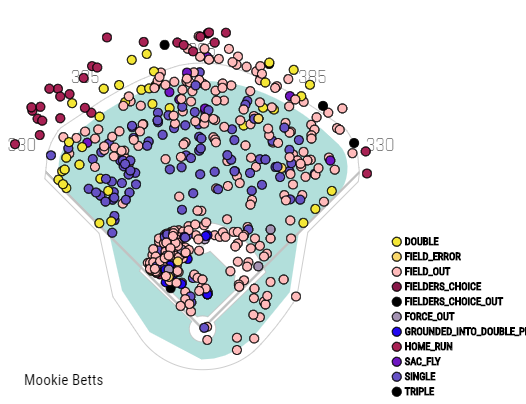 Dodger Stadium is actually far more hitter-friendly to center field than Fenway Park, and that's great for a hitter like Betts, who sprays the ball over the yard. Is a 35-35 season in store?

Our first medium-risk player is with a starting pitcher, but that's actually not why Gerrit Cole carries risk heading into the 2020 season.

There's no doubting Cole's absurd brilliance a year ago as a member of the Astros. If you lived under a rock, Cole logged a 39.9% strikeout rate over 212 1/3 innings pitched with a 2.50 ERA. So why on earth isn't he as safe as it gets?

Many folks see the Crawford Boxes in that short left-field porch and assume Houston is a hitting haven, but it's a whole new ballgame pitching in the AL East. According to ESPN's park factors, he now has to pitch in Camden Yards (fourth in home run factor), Fenway Park (ninth in park factor), and the Rogers Centre (league-best in home run factor).

It doesn't mean that Cole won't be strong yet again but expecting a duplicate performance of last year could leave you scratching your head a bit.

There's a gap in picks until our next selection, which is another New York hurler in Jacob deGrom of the New York Mets.

Like Cole, deGrom has been outstanding over the last couple of seasons. He's durable with over 200 innings in each of the last three years, and he's posted a sub-3.50 SIERA in each of those years, as well. It's no surprise that he has won back-to-back Cy Young awards in 2018 and 2019.

But deGrom is limited by one little nasty fantasy category -- wins. deGrom owns only 21 wins over the last two seasons, which put him in unique company among the other elite starting pitchers:

Only Jack Flaherty, who pitched part of 2018 in the minor leagues, has fewer wins than deGrom, and he trails his Astros counterparts by 16 and 14 wins, respectively. Just know that if you draft deGrom, he may not post the large win totals that you expect out of a staff ace.

While the fantasy community was cautious with Francisco Lindor's injury to begin the 2019 season, the shortstop has been one of baseball's most durable players.

Even with that missed time to begin the season, Lindor has logged 650 or more plate appearances in each of the last four years, hitting and stealing 15 or more home runs/stolen bases each in those campaigns. As we have talked at length, with speed slipping, that's a big positive for Lindor.

With others grabbing riskier picks like Cole and deGrom, feel more than comfortable drafting Lindor.

It's really hard labeling anyone who could have the opportunity of playing 81 regular season games in Coors Field as risky, but Trevor Story isn't necessarily a slam dunk.

Let's start with the positives. A massive power-speed combo, Story has hit 72 home runs with 50 steals over the last two seasons. He's also posted .290-plus batting averages in each of those years.

And the home-road splits are downright ugly for his career:

Story is an outstanding talent, but his risk seems to carry a bit more water than the other first-rounders.

We all know that speed is on the major decline, and in peeking at the 2019 season, only six players stole 30 or more bases. Trea Turner was one of those players (35) in only 569 plate appearances. It doesn't seem like speed is coming back any time soon.

If Turner can stay healthy, he could be a league-winning pick. If he gets hurt and misses time again, it could be a tough gap to make up for in the first round.

Another pair of teammates makes this list, and this time it's the Washington Nationals and Juan Soto who make the first round.

A year from now, we could be discussing Soto banging the door down as a top-five pick if he runs a bit more. He owns a career 16.2% walk rate, which led to a tidy 110 run and runs batted in (each) a year ago, posted against only a 20.0% strikeout rate. His 12 steals were outstanding but just slightly down from the likes of an Acuna or even Cody Bellinger.

Soto is very worthy of investing an early pick.

This is a bit of a challenging one to embark on, but let's try and talk about the things that we do know.

But there are some oddities here, especially as we look at his batted-ball profile: 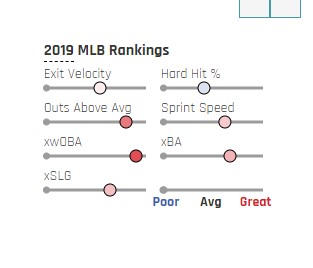 Bregman ranks in the middle of the pack (54th percentile) in exit velocity, and he's below average in hard-hit rate (41st percentile). His 3.8% barrel rate per plate appearance sandwiches him between Brandon Crawford and Omar Narvaez on the hitting leaderboard. Not exactly what you'd expect out of a guy with 41 home runs a year ago.

Now, taking into account the current shenanigans with the Astros, there's too much volatility here for me to invest a high pick.