Just like in other sports, the focal point of your daily fantasy baseball lineups will be your high-priced studs. These guys take up by far the biggest chunk of your cap space, but they also offer the highest ceiling, and in the case of pitcher, by far the highest floors for production.

For hitters, we're looking for guys with big numbers, strong matchups, and with players around them that are likely to produce well too, increasing our chances for runs and RBI. For pitchers we want big strikeout numbers, while the ability to go deep in a game and pick up a win is also valuable.

Taking up so much salary, and playing such a big role in your lineup's ceiling, you're not going to want to whiff on these guys, so lets take a look at a few top-end options that you can count on to anchor your lineup today.

A day after a masterful performance by Jacob deGrom against the Miami Marlins, we get to target this woeful offense with Zack Wheeler, and he's primed for a monster night.

While Wheeler has been a bit noisy to roster, he does have a pile of peripherals we want to own, including a 26.0% strikeout rate, 6.1% walk rate, 10.7% swinging-strike rate, and 33.1% hard-hit rate. It's no surprise that he leads the way as our model's highest-projected pitcher on tonight's docket.

If you can afford to roster the pricy hurler, grab Wheeler.

Because hitters like Christian Yelich and Cody Bellinger have grabbed so much of the spotlight, Anthony Rendon has quietly put up an MVP-type of season, and yet most have not noticed. Is he really much farther back than the others?

It's clear that those two have been a step above Rendon, but outside of the home runs, he's not that far behind everywhere else. And for DFS purposes, he has a dream matchup tonight against lefty Conner Menez of the San Francisco Giants.

Menez is a highly touted prospect in the San Francisco system who's posted solid strikeout numbers throughout his career, including a 33.9% streikout rate at Triple-A this season in 44 1/3 innings pitched. But he will need to be on his game, as Rendon has smashed lefties into oblivion -- this season, he owns a cool 1.016 OPS in 99 plate appearances, and he has a career .382 wOBA against southpaws.

On a tear this year with no signs of slowing down, Rendon should be a solid play.

Death. Taxes. Nelson Cruz hitting home runs. There aren't many guarantees in life, but this dude apparently will not slow down from hitting jacks, and he's armed and ready to add to his total tonight.

After clearing the 30-homer mark again for the sixth straight season (see spray chart below for all 30), Cruz will take aim at Mike Foltynewicz, who has been in Triple-A Gwinnett for a bit. And if there's one thing Folty's familiar with, it's the long ball -- he's allowed 2.43 home runs per nine innings (HR/9) this season, which includes a .537 slugging percentage to righties. 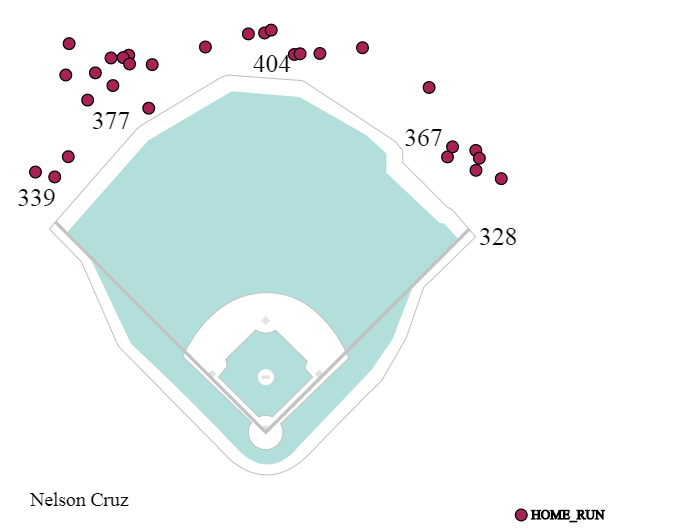 Cruz has been no slug against same-sided arms this year, posting a .968 OPS and .567 slugging percentage over 267 plate appearances in 2019. If you're looking for someone with some serious pop in the outfield tonight, peep Cruz.

Matt Kupferle is not a FanDuel employee. In addition to providing DFS gameplay advice, Matt Kupferle also participates in DFS contests on FanDuel using his personal account, username MKupferle. While the strategies and player selections recommended in his articles are his personal views, he may deploy different strategies and player selections when entering contests with his personal account. The views expressed in his articles are the author's alone and do not necessarily reflect the views of FanDuel.