Matt Kupferle  —  @MKupferle Apr 16th, 2019
Share on Facebook Share on Twitter
Joe Musgrove has been a man on a mission to start 2019, and he has a fantastic matchup against a struggling Tigers lineup. Should you pass on the top-priced arms and plug in Musgrove?

As a result, lineup construction should begin with the starting pitcher. Each day we will highlight a starter to consider from each pricing tier, and we'll also look at one contrarian play for tournaments. Who should you consider on today's main slate?

We've got a big ol' main slate tonight, which gives us a plethora of pitching options to consider, including four guys priced above $9,500.

At the top end, Stephen Strasburg of the Washington Nationals seems like an absolute no-brainer. While Strasburg possesses plenty of juicy upside due to his own ability, his matchup is what sets him apart.

Tonight, he will attack a San Francisco Giants team is one of the league's worst offenses. They sport a .249 wOBA (league-worst mark), .114 isolated power (ISO, second-worst), and 24.9% strikeout rate (11th-worst).

Don't overthink this one in cash -- pay up for Strasburg and get to work on the rest of your lineup.

A shade below the top-tier arms, Joe Musgrove of the Pittsburgh Pirates faces a Detroit Tigers offense that has had a tough time this season. If Nick Castellanos remains out, as he has been battling a toe injury, it makes this an even more appealing spot.

Musgrove has been brilliant to start his 2019 campaign. While his 0.00 ERA will obviously regress, a 27.3% strikeout rate, 12.7% swinging-strike rate, and 19.4% hard-hit rate all show that he could be in the midst of a breakout.

That adds fuel to the fire of facing a Tigers offense that is bad. They clock in third-worst in strikeout rate at 26.9%, and their .265 wOBA, also third-worst, ain't nothin' to write home about.

Perhaps hidden in the mediocrity known as the Chicago Cubs' pitching staff is that Jose Quintana is off to a scintillating start, and blessed with a great matchup tonight, he is a pretty appealing pitcher to consider.

It's early, but in 14 innings, Quintana sports a career-best 33.9% strikeout rate, and his 26.5% fly-ball rate has helped him keep the ball in the park. His 45.7% hard-hit rate should give us a bit of a pause, but that is quickly quelled against tonight's opponent, the Miami Marlins.

This season, Miami ranks fifth-worst with a .275 wOBA, and they also own the fifth-worst team strikeout rate (26.2%). The Marlins' 3.77 implied team total is also the fifth-lowest on the main slate, so think long and hard about Quintana.

After a promising start to 2018, Tyler Mahle's season fell off the tracks, eventually leading to a demotion to Triple-A. But he could be turning things around in 2019.

Over 11 innings, Mahle has been a bright spot for the Cincinnati Reds, posting a 0.82 ERA and 3.75 SIERA with a saucy 28.6% strikeout rate. What's changed? It looks like his pitch mix more than anything else. Mahle has tossed a curveball nearly 23% of the time, per Brooks Baseball. 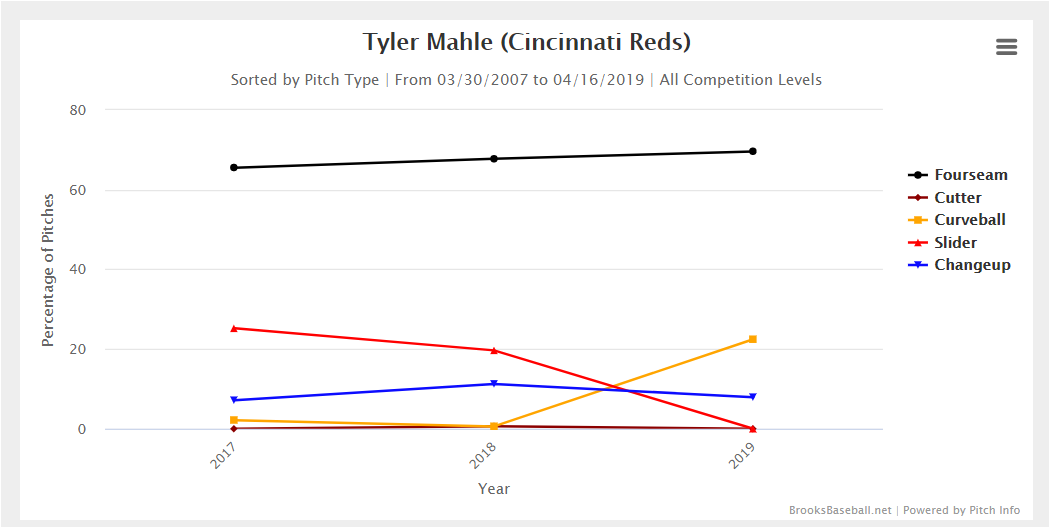 That yellow line spiking up in 2019 is said curveball, and it's been a solid offering. Now, the Los Angeles Dodgers are clearly no pushover on offense -- they lead the league with a .375 wOBA -- but for an outside-the-box play who won't see much ownership, think about Mahle and his depressed price.

Matt Kupferle is not a FanDuel employee. In addition to providing DFS gameplay advice, Matt Kupferle also participates in DFS contests on FanDuel using his personal account, username MKupferle. While the strategies and player selections recommended in his articles are his personal views, he may deploy different strategies and player selections when entering contests with his personal account. The views expressed in his articles are the author's alone and do not necessarily reflect the views of FanDuel.