Stacking can be a controversial topic in many daily fantasy sports, but you can count baseball as a glaring exception. Here, it's universal.

Using multiple players on the same team on a given day presents you with the opportunity to double dip. If one of your players hits an RBI double, there's a good chance he drove in another one of your guys. When you get the points for both the run and the RBI, you'll be climbing the leaderboards fast.

Each day here on numberFire, we'll go through four offenses ripe for the stacking. They could have a great matchup, be in a great park, or just have a lot of quality sticks in the lineup, but these are the offenses primed for big days that you may want a piece of.

Premium members can use our new stacking feature to customize their stacks within their optimal lineups for the day, choosing the team you want to stack and how many players you want to include. You can also check out our hitting heat map, which provides an illustration of which offenses have the best combination of matchup and potency.

Now, let's get to the stacks.

The Cleveland Indians offense has gotten off to a bit of a slow start this season -- ranking only 25th in with a .291 weighted on-base average (wOBA) -- but sporting the second-highest implied team total (4.77) on the main slate, they could pick up the pace thanks to a matchup with Erasmo Ramirez.

As an owner of Edwin Encarnacion ($3,500) across many season-long leagues and several DFS entries, this .176 batting average start to 2018 has been a tough pill to swallow. But Double-E has displayed an ability to heat up as the weather warms throughout his career. 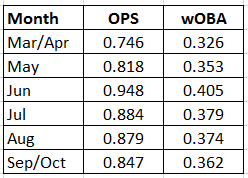 Encarnacion may be starting his ascent a few days early -- as he has now hit safely in five straight contests -- and it may be one of the last times you get to roster him at a depressed price point. Against righties last year, he bombed them for a .376 wOBA and 44.1% fly-ball rate, and he's upped his fly-ball rate to 46.3% in 2018.