These 3 Huge Home Runs Flipped Win Probability on Its Head

John Stolnis  —  @johnstolnis Apr 6th, 2017
Share on Facebook Share on Twitter
The Astros, Red Sox and Indians all won thanks to late-inning heroics on Wednesday night, creating some madness with regard to win probability.

There's nothing better than a walk-off home run. And on the fourth official night of the 2017 MLB season, there were two of 'em.

Oh, and there was also a ninth inning dinger that dramatically changed the course of another game.

The Boston Red Sox and Houston Astros both won on walk-off blasts in extra innings, while the Cleveland Indians changed the course of their game with a dramatic bomb in the top of the ninth, capping off a night filled with drama.

And in the process, those blasts flipped win probability completely on its head.

Boston and the Pittsburgh Pirates didn't have much offense going last night. In fact, they had nothing going for more than 12 innings as both teams were scoreless heading into the 13th. After the Pirates went quietly in the top half of the inning, Red Sox catcher Sandy Leon decided enough was enough.

Leon's blast broke a 0-0 tie and sent Boston home with a 3-0 victory in their Interleague battle with the Buccos. The win probability shift from this event will be the least dramatic of the three games mentioned here, but it's still noteworthy nonetheless. Below is FanGraphs' Win Probability chart for this matchup. 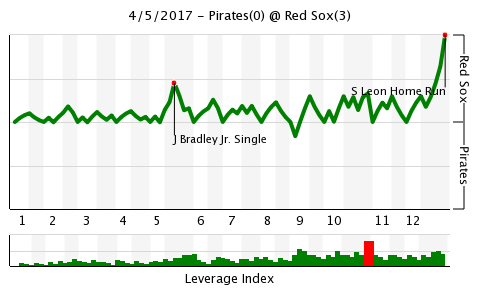 When Chris Young flied out to start the inning, Boston had a 58.7% chance to win the game. Obviously, a few minutes later, Leon had gotten them to 100% with his big fly to left.

There would be more drama to come.

Lindor Breaks the Heart(s) of Texas

Francisco Lindor is a sneaky pick for AL MVP this year. He's going to be one of the major cogs of Cleveland's offense and is a dynamic superstar who can change the course of a game with one swing of the bat.

Against the Texas Rangers last night, he did just that.

When the Indians entered the top of the ninth inning down 6-4, they only had an 8.1% chance of winning. By the end, Lindor had completely flipped that on its head, as FanGraphs' Win Probability chart demonstrates. 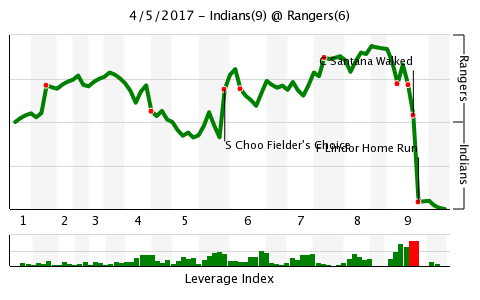 Cleveland's offense, with the addition of Edwin Encarnacion and the return of Michael Brantley, just might be the best in baseball this season. However, Lindor is the straw that stirs the drink in Cleveland.

Springer Springs Into Action Against Seattle

The Astros faded from the front pages last year a bit, but appear determined to once again be a force to be reckoned with in the American League West.

Enter George Springer, one of the best players in baseball that isn't talked about nearly enough. He came to the plate in the bottom of the 13th against the Seattle Mariners with his team trailing by a run.

It didn't stay that way.

The Mariners were one strike away from locking up the victory. With runners on first and second and two out, the Astros only had a 16.7% chance of winning the game. One batter previous, it was only 9.5%. 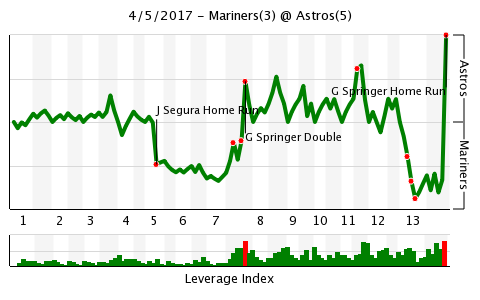 Springer's tater to the left field stands sent the Houston homies happy and gave them a dramatic, 5-3, walk-off win.

That's not a bad night of action for the fourth official evening of professional baseball in America.