If we hear something stated often enough, we're likely to just accept it as fact. "New York's pizza is better than Chicago's" and "Forrest Gump was a good movie" are just two examples of clear falsehoods that have been repeated to a point of being considered truthful.

We hear it every year around this time as exhibition games get underway, and to a certain extent, it's true. Some spring training stats -- such as batting average -- don't make a lick of difference. But we can still learn things from looking at these numbers, and it's important not to simply dismiss them as being complete noise.

The question, though, is which spring stats do matter? It would seem foolish to simply accept a player's triple slash over 50 plate appearances to be a baseline expectation, so where should we turn instead when trying to draw conclusions from spring games?

Let's test this out by going back to the 2016 season. There were 124 players who had at least 50 plate appearances in spring training and 400 in the regular season, allowing us to see which stats had the highest correlation between the two segments. Looking at this would give us a good idea of which stats matter in spring and which we can simply disregard.

Where should we be looking when investigating spring training stats? Let's check it out.

To keep things simple, let's just present the correlations between the regular season stats and spring stats of each of these 124 players. Even though 50 plate appearances in the spring isn't a huge sample, there was still a correlation between the data.

For each player, their batting average, on-base percentage, slugging percentage, isolated slugging, walk rate, and strikeout rate were all recorded for both segments. Here are the correlations between each category for the regular season and spring training.

There is a statistically-significant correlation between all six of these categories, but walk rate and strikeout rate outclassed the rest.

With a correlation that high, it does mean we can draw conclusions from a player's strikeout rate in spring training as long as he gets to a sample of at least 50 plate appearances. According to a FanGraphs post on stabilization points for statistics, strikeout rate stabilizes after 60 plate appearances, so this really shouldn't be a major surprise.

To present the data in a different way, here's a plot of these 124 players and their strikeout rates in the spring and the regular season. This backs up the strong ties in the correlation even after a sample of just 50 plate appearances. 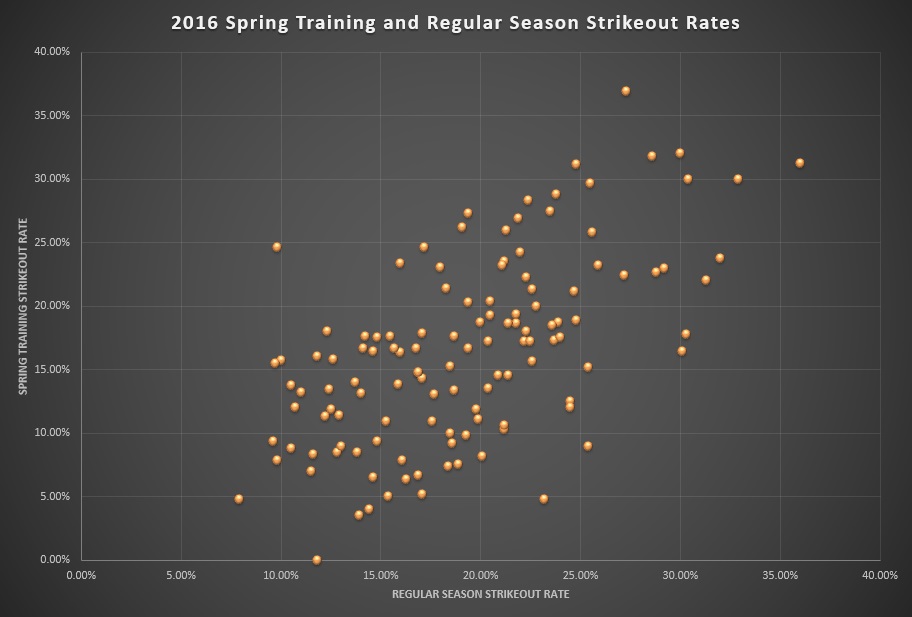 Each player on this list had a strikeout rate that was well above the league average, and six of them were above 27.0% in the regular season. Ignoring strikeout rates could have forced us to overlook players who struggled during the year.

In 2015, Carlos Gomez finished the year with a 21.2% strikeout rate, a couple percentage points above the league-average strikeout rate of 19.9% for non-pitchers. The following spring, though, he struck out in 32.0% of his plate appearances, proceeded to struggle in the regular season with the Houston Astros, got released, and eventually signed with the Texas Rangers. Gomez eventually came on for a strong September, but it's possible we should have seen his struggles coming.

We can see a bit of a similar (though less drastic) story with Justin Upton. With the San Diego Padres in 2015, his strikeout rate was lofty at 25.6%, but nothing grotesque. In his first spring with the Detroit Tigers, it jumped up to 31.7%. He went on to strike out a whopping 36.5% of the time the first two months of the season before getting things on track in June. Upton was able to finish the season strong, but you can bet fantasy owners were none too pleased with their investment early on.

The takeaway from this seems to be that you want to find players who are deviating from their marks in previous seasons. It is worth noting that strikeout rates are generally lower in the spring (the average strikeout rate for these 124 players was 16.5% compared to 19.3% in the regular season), so if a player has a slight downtick, we shouldn't overreact. But if a guy is showing serious movement in one way or another, we need to take note of it and -- potentially -- adjust our thinking appropriately.

Other Stats to Note

Although the correlation for strikeout rates was highest, there were other stats that did seem meaningful during spring training. Specifically, it can't hurt to note a player's walk rate and isolated slugging.

Let's start things off with the walks by showing the same graph as above for our set of 124 players. Again, although the correlation isn't quite as large, there is still a clear trend. 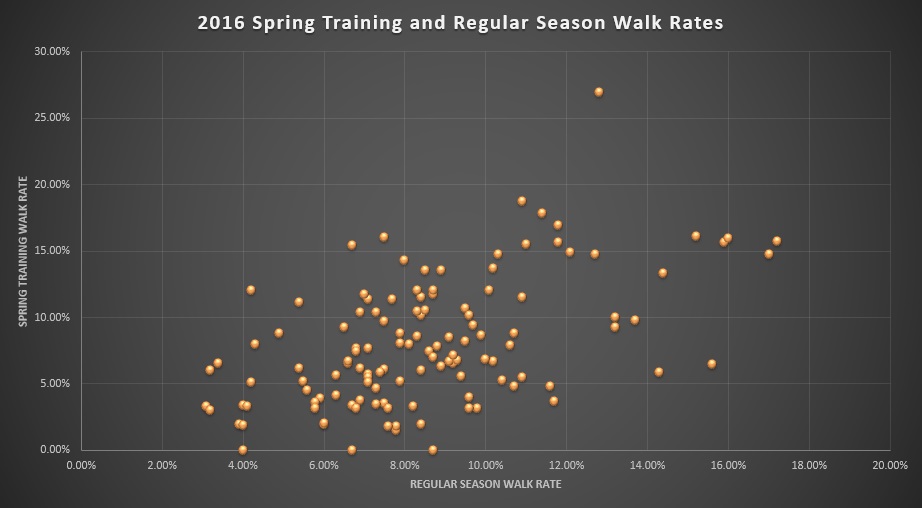 Freddie Freeman outchea murking the entire thing by walking in 26.9% of his plate appearances last spring. I ain't mad, doe.

Of the 12 players who walked in at least 15.0% of their spring plate appearances last year, only two failed to log a walk rate of at least 10.0% in the regular season. Nine of these players were at 11.0% or higher, and four of them were in the top 10 in walk rate among qualified batters at year's end. There's still something to be learned here.

Just like strikeouts, walks are a bit lower in the spring than in the regular season. Our sample averaged an 8.1% walk rate during the spring compared to 8.6% in the regular season, so be sure to adjust expectations when peeping what they're doing in exhibitions. But if you spot major deviations, it's time to investigate further.

Isolated slugging had a lower correlation to regular-season results than both walk rate and strikeout rate, meaning we should also view it with more skepticism. But there can still be some interesting takeaways.

Here are the top 10 players in isolated slugging during spring training from our list of 124 players. You're going to recognize a few of these names.

Six of these guys are top-30 picks in the National Fantasy Baseball Championship average draft positions, J.D. Martinez is 51st, and Andrew McCutchen is 67th. The only two guys who aren't high-profile fantasy assets are Brandon Belt -- who plays in the worst park of all for fantasy success -- and Maikel Franco, who managed to belt 25 home runs last year in his age-23 season. That's a really fun list.

We'll always want to be skeptical of guys who flash pop in spring training. But if they're guaranteed opportunity and that power comes over a respectable sample size, why not take a look? Trevor Story showed the advantages of this last year, and it could always happen again this spring.

On the whole, most spring training stats don't matter. We should be actively avoiding things such as a player's batting average and other purely results-based stats. But we can't simply toss aside all information.

There is a lot of value in tracking a player's strikeout rate and walk rate throughout the spring. If they exhibit a major change from where they've been at in the past, it could be indicative of issues that will leak over into the regular season. We saw this with guys like Gomez and Upton last year, and it presents a case for weighing this information appropriately.

Isolated slugging is less valuable than those two marks, but it does still appear to have merit. If a player seems to be making impactful contact on a consistent basis, it can't hurt to check him out and see if there may be a reason for increased optimism.

We've heard for so long spring training stats don't matter, and it has become a fact in our minds. However, the data seems to contradict that. Maybe taking the time to focus on the stats that truly matter can help us to avoid the noise of other stats while also taking in as much relevant information as possible.