Fantasy Baseball: Robert Gsellman Could Be a Late-Round Steal

It's spring training, and a ton of roles are on the line. Positional battles are all over the place, and as we kick off games and the dust starts to settle, those roles start to become a little easier to define.

As we head into draft season, one of the current battles is for the New York Mets' fifth starter job. The first four spots seem locked up by the Mets' young aces, but Robert Gsellman is primarily battling with Zack Wheeler, who is recovering from Tommy John surgery and had a setback last year, for that last spot.

Gsellman got a quick cup of coffee last season with the Mets, and he was pretty strong over 44 2/3 innings pitched, posting a 2.42 ERA and 2.63 FIP. So can Gsellman win the job and perform at a similar level, or was this a flash in the pan?

Struggles in the Pacific Coast League

Gsellman's 2016 debut surprised quite a few folks due to the fact that he struggled badly as a member of the Las Vegas 51s in 2016, which was his last stop before his late call-up last season.

Gsellman flashed strong numbers in every stop, but he was hammered at Triple-A in the Pacific Coast League. Some could point to his home park, as Cashman Field in Las Vegas elevates run scoring by 13%, so that may have been part of the issue.

But the primary culprit could have just been poor performance as Gsellman gave up a pile of home runs -- 1.48 per nine innings (HR/9), to be exact. Giving up that many bombs, it's easy to see how he went 1-5 over six starts with an elevated ERA. That level of performance certainly didn't signal a breakout stop in the bigs.

Limiting Homers in Other Stops

While Gsellman was pretty bad in Triple-A, he posted pretty strong peripherals in other stops. And while that home run rate was really bad in Vegas, he's posted superb home run rates everywhere else.

Gsellman isn't just pretty good at limiting home run damage, he's elite at it -- among qualified major league starters in 2016, Gerrit Cole led the league with a 0.50 HR/9 rate. Gsellman has been better that rate in each of his last six stops, save the blip in Las Vegas.

How can he be so good at keeping the ball in the yard and limiting the big inning? Taking a look at pitch data over at Baseball Prospectus, Gsellman's sinker ranked 12th-best in baseball in generating ground balls (minimum 200 pitches thrown). This elite pitch has been a big reason for that success and helped him post a 54.2% ground-ball rate in his stint with the Mets last year.

One limiting factor on Gsellman being big-league ready is his lack of swings and misses. Labeled rightfully as a pitch-to-contact starter, he's trended far below the league average in generating whiffs.

But in his short call-up last year, Gsellman quickly introduced a new weapon, which is known as the "Warthen Slider". Dan Warthen, the pitching coach of the Mets, has implemented this version of the traditional slider, which is a mix in between a slider and a cutter, to each of his prodigies.

While he only introduced this pitch for a mere two months, taking a closer look at pitch data over at Brooks Baseball, it was a huge weapon, and it seems to have influenced his increase in strikeout rate of 4.1% from Triple-A to the bigs. 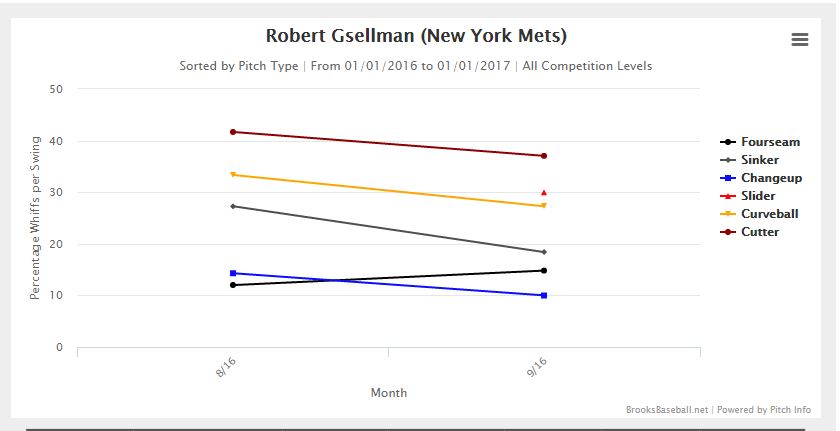 Of course, it's hard to draw too much from a small sample of 44 2/3 innings, but the jump in strikeout rate was backed by a decent-enough 9.1% swinging-strike rate.

The 13th-round pick out from the 2011 MLB Draft still hasn't won that last starting job yet, and it's one of those battles to keep your eye on throughout spring training. That's clear in looking over at NFBC ADP draft data, where Gsellman is the 358th player off the board and listed as a middle reliever.

Basically free at that draft spot, if Gsellman can continue to build on those gains he showed in the Big Apple last year, he is a major weapon this late in drafts. In fact, over the last 15 drafts at NFBC, Gsellman's price is starting to rise, as he is going a bit higher at 330th overall.

Combined with the fact that Matt Harvey, Jacob deGrom, and Steven Matz combined to only make 63 starts last season, and it would appear that Gsellman is likely to have some form of a starting role with the Mets at some point this season. That alone makes him worth monitoring, but if he can lock down a starting job out of camp, he could be a late-round steal in fantasy drafts.

Fantasy Baseball: Which Mets Pitcher Is the Best Bet for a Rebound?